Joseph Henry Sharp was a painter and illustrator, and one of the founding members of the Taos Art Colony. After a childhood accident, which left Sharp deaf, he learned to read lips and carried a pad and pencil with him wherever he went. It was during this period sharp first realized he had a natural proclivity towards art. At fourteen, finding that his hearing loss made school increasingly difficult as he got older, Sharp dropped out and moved to Cincinnati to live with his aunt. He saved up for art classes at Mickmicken University, studying when he could. Eventually Sharp was able to save enough to travel to Europe where he spent two years studying at the Antwerp Academy where he learned the realist tradition and had experiences in history painting and portraiture. Following his period of study, Sharp returned to the United States and began working for Harper’s Weekly as an illustrator. In addition, Sharp embarked on his first trip to the West on assignment during this period, and was captivated by its landscape and the peoples that populated it. Sharps period in Antwerp was the first of many trips he would take to Europe to study the great masters, including further formal education at the Academie Julian in Paris where he met Burt Geer Phillips and Ernest Blumenschein. It was Sharp who would tell Phillips and Blumenschein about the grandeur of the West, capturing their imaginations with his stories and sketches. After his period in France, Sharp returned to Cincinnati, and spent time in Montana making portraits of the Indigenous Peoples he came in contact with. An exhibition of these works traveled from Washington D.C. to Paris, and a number of them were purchased by the Smithsonian Institution. President Roosevelt had the Indian Commission build a cabin and studio for Sharp. This marked the beginning of an extremely prolific period for Sharp. After a collector bought 80 paintings at once from Sharp, he was able to stop illustrating and focus solely on easel painting. In 1909 Sharp moved to New Mexico, eventually landing in Taos where he worked and lived for much of the remainder of his life.

During his lifetime Sharp garnered critical and financial success for his work and exhibited nationally and internationally. Towards the end of his life Sharp was given a retrospective by the Gilcrease Museum in Tulsa, Oklahoma, which still maintains the largest public collection of the artists work. In addition to the Gilcrease Museum, Sharps work is represented in the public collections of the Cincinnati Art Museum; the Smithsonian Museum of American Art; the American Museum of Western Art in Denver, CO;  and The Buffalo Bill Center of the West. 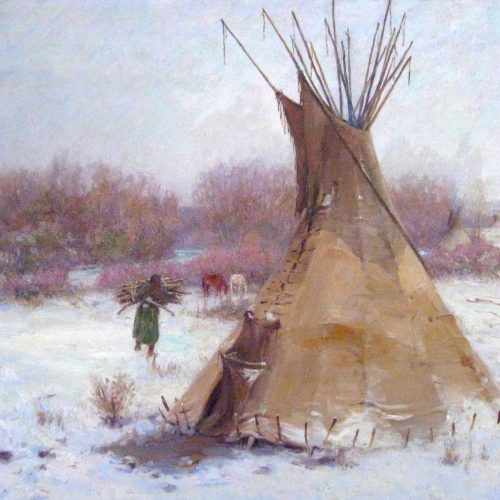 The Moon of Difficulty