Charles Schreyvogel was a prominent American sculptor and painter of Western scenes. Early patrons of his allowed Shreyvogel to study at the Munich Art Academy. There, he developed his academic style. After returning to the United States Shreyvogel fell ill, a doctor recommended he travel west for his health. He was able to travel west due to patronage and fell in love with the landscape. He continued painting and eventually garnered recognition for his work after the painting, “My Bunkie,” won the Thomas B. Clarke Prize at the National Academy of Design exhibition in 1901. A feud between Charles Schreyvogel and Frederic Remington began over authenticity within western genre paintings. The two were rivals until Remington’s death in 1909, after which Schreyvogel became the premier Western genre painter for the brief remainder of his life.

Due to Schreyvogel’s relatively late success he was less prolific than many of his contemporaries. Fewer than one hundred paintings of his are known to exist. These are held internationally in private and public collections, and garner high prices when they appear at auction. Some of his best known works, including the painting “My Bunkie” which launched his career, are held in the public collection of The Metropolitan Museum of Art in New York. 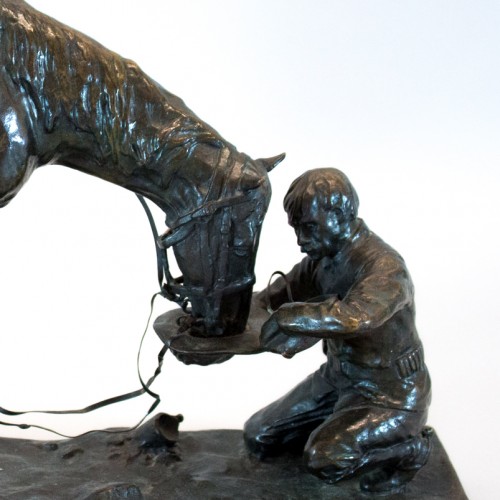